Hi there, If you’ve missed my first blog well I’ll give you a short recap, I’ve challenged myself to photograph something/anything a day using only my Canon 650D and 18-200 mm lens. I won’t be using any other equipment besides that nor will I use photoshop to enhance my image.

Well, I thought I’d go easy on myself and start with something that I am very comfortable to photograph. The theme or the Idea I had in mind is to photograph an ancient Japanese clay teapot and its teacup in a centre table close to the window.

I had numerous trials; I’ll show you my 1st attempt, 2nd, 3rd, 4th and my final attempt.

As you can see at the images above, I’ve done some alteration on how I shot each image.

The first Image, well as you can see the shot is in a landscape, it was simple. (ISO800, 40 f5.6) I felt like I can do better than this, I mean there was nothing unusual, to be honest, this teapot isn’t special at all, but the goal is to make it look unique and give it oomph.

So I took numerous (I shot the hell out of it) shot in different angle until I found the shot I believe has the potential. Then, I pulled up the curtain to let more light in, so I can see a bit of the outside, and instantly I saw a dramatic change in the image. I quickly saw a foreground, midground and a background. The next thing I did was change my shot to portrait since I want the whole attention to the teapot and the teacup and then changed my camera settings to compensate for the light that is coming in, my camera settings (1600ISO, 200, f13).  The end product, well it was a bit dark, but I’ve noticed the shadow of the teapot, and I’m always a big fan of reflections and shadows, so definitely that’s going to be a keeper on my next trial.

So on my fourth attempt, I’ve raised my shutter speed to 80 and added some reflectors to the image. As you can see from the image below, I pinned a white paper on the left side and also on the right (I had to take off the right-hand side so you can see the whole thing). 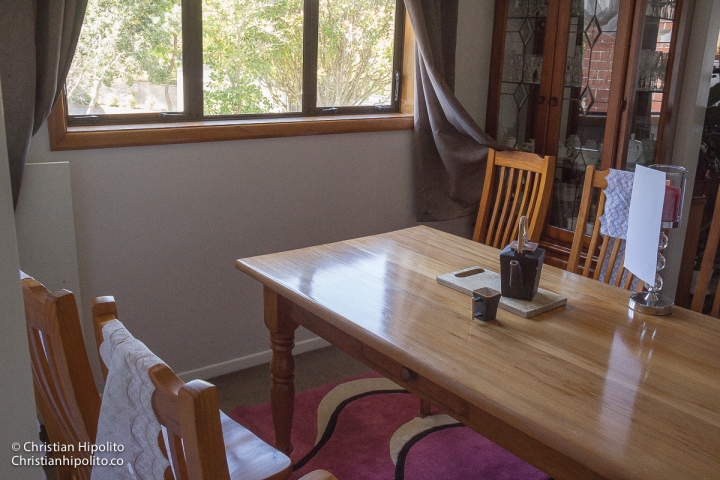 Here’s the product of my fourth attempt (image below), I thought it’s perfect but I still felt I can still push it more.

I thought, how about I add some smoke on the teapot, to make it look like its hot. So I experimented. I turned on my electric kettle and boiled some water. I added the boiling water to the teapot and cup, but the smoke wasn’t visible. The next thing I did was lit up some matches and quickly placed it in the pot and what did you know, it works.

So here’s the final product my friends, let me know what you think and maybe you could tell me as well what I should take a photo tomorrow.

Hi, my name is Christian Hipolito. I'm a season Photographer & Filmmaker based here in Wellington, New Zealand. My involvement with photography started when I was 12 years old, that was 1991, my dad was a photographer, and we use to own a studio, back then photographers were highly praised, I mean those years you can't be a photographer if your shots were horrible, you have to earn it, you have to practice every day, and you have to be financially stable to become a photographer, one of the reason not a lot of people are interested in pursuing photography. Back then my dad required a runner to do his bidding, and I was that guy, my task was to head to the Photo Lab and wait till the rolls get printed. To be frank, I hadn't had the patience to hold on, and also I miss out on my favorite cartoon TV shows. A few months later things changed, my dad started giving me money. The money he gave wasn't that much by the way but I was hyped, I was able to buy those GI JOE's toys, and then another few months later my father started teaching me how to change films, how to use an enlarger, develop black & white photos and even introduced me to his colleagues. My interest in photography heightened, I even started taking shots. One day he asked me to take a picture and develop it myself, I was like "WOW." The thrill and the excitement of waiting, I wasn't sure what I was going to get, is it going to be under or over, If I recall I was guttered to see that it was all black. The year 1993, I had a chance to play with a Minolta Dynax 7D, I was 14 years old, I use this camera if I'm taking photos at school, I was a little paparazzi of Paco Catholic School Gazette. I was cool, and my schoolmates feared me because I might take their picture surprisingly. Back then, all I know was to put in the film, press click, develop and print; I wasn't following the rule of thirds nor was I sure what exposure is, but was interested in photography. to continue reading more about me please go to www.christianhipolito.co View all posts by christianhipolito